The Everlasting Gospel first preached to the Jews by Peter -the Jewish apostle Jesus gave the keys to. Have you obeyed the gospel?

False gospels abound and only a minority preach obedience to the gospel once delivered to the saints. Even then, the remainder of the apostles' doctrine is laid aside and neglected, written off as "personal convictions." Christianity today looks nothing like the original nor is it in line with the blueprint the apostles' left for us to follow.

Jesus, nor His apostles' ever led anyone in a sinner's prayer for salvation but commanded obedience to the gospel. Acts 16:30-31 is drilled while the very next two verses never receive an honorable mention. No one bothers with Romans 10:16 on the so called "Roman Road". Many if not most people who say they are born again have ever had the real experience -the most glorious and necessary experience in the world.

Because Jesus said you must be born again, we must search the scriptures to be certain our born again experience matches that of the early church which continued stedfastly in the apostles' doctrine. Rejecting anything that does not conform to the apostles' doctrine, we must... Obey the Gospel, which entails three keys to salvation. #1. Repent #2. Be baptized in the Name of Jesus for the remission of sins #3. Receive the gift of the Holy Ghost. For by one Spirit are we all baptized into one body, whether we be Jews or Gentiles, whether we be bond or free; and have been all made to drink into one Spirit. I Corinthians 12:13 Acts 2:38 is the clarion call to obey the gospel preached by Peter, the apostle Jesus Christ gave the keys of the kingdom of heaven to. Devout Jews asked the apostles, "Men and brethren, what shall we do?" Then, Peter said unto them... obedience to the everlasting gospel of Jesus Christ was succinctly summed up in the singular, most key and for centuries most suppressed verse of salvation: 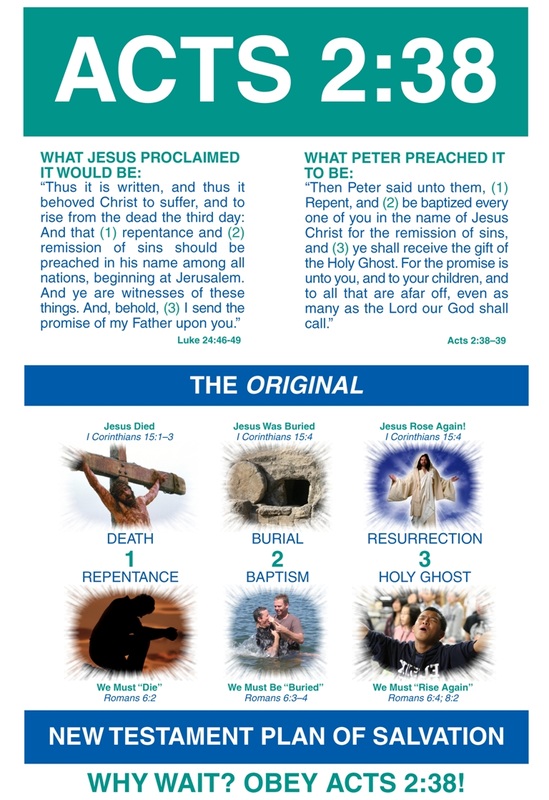 Please don't stop there but prayerfully, studiously, verify the clear pattern of Acts 2:38 salvation in the following verses for yourself:

The Truth about Church Leadership

Jesus ordained apostles and the apostles ordained elders. A pyramidal hierarchy of church governance can not be found in the New Testament. There was one assembly of believers in each city with a plurality of elders serving the body and Jesus alone exalted as head. This is the apostles' doctrine. Man's hierarchy not only gets in the way of the body's view of the good Shepherd but severs the connection of Christ and His body, composed of all believers. The apostles did everything with preservation of the faith in mind. They established safe and sound doctrine that would stand the test of time, helping you and I see and as a body be connected to our head -the Lord Jesus.

In the book of John, chapter 17, Jesus prayed that we would be one, as He and the Father are one. What greater doctrine of division exists than the manmade separation of a "clergy" class from a "laity" class of believers? We cannot find the concept nor wording in the scriptures. It was not part of the apostles' doctrine but something, early on, the apostles were beginning to combat.

Most who willingly accept, preach and teach the gospel the apostles preached(there is no other), do not see or understand the apostles' doctrine regarding church structure and governance, many being willfully ignorant. More than any other doctrine, so much rides on getting the apostles' doctrine of elders and deacons "with" the saints right. One man being over a congregation is unsound doctrine and leaves the gate wide open to attack of the enemy on him and those following him.

Man is not the founder, owner or head of the body of Christ. Jesus alone is the head and is to function as such. We are to follow Godly men only as they follow Christ. The early church knew nothing of a solo pastor/priest hierarchy, nor professional clergy but Jesus really was the leader and the apostles were to ordain elders(plural) in every city -not a separated clergy class to control the people of God but men who were known locally as brethren and met the stringent biblical guidelines and qualifications. To read further on the urgent topic of biblical eldership, please click HERE in the fear of the Lord and not man.